The Mohawks are a tribe that formed during the early 17th century. This clan was part of the five nation confederacy, which was a peaceful association between five Indian tribes. 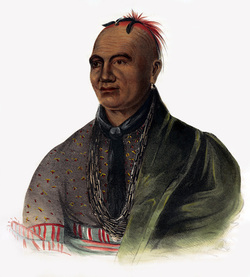 Joseph Brandt was one of the most important Mohawk chiefs, he ruled the tribe from 1742-1807. Throughout these years he served under sir William Johnson during the French Indian war. During the American revolution he also worked to bind the indigenous people to the loyalist and British sides. After the revolution the Mohawks failed to continuously settle in America. Due to this Brandt concerned lands and earned funds to enable the Mohawks to settle in Canada. 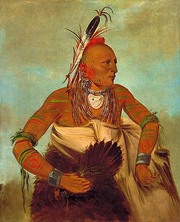 A photograph of a typical Mohawk man
Lifestyle

The Mohawk men hunted the food for the tribe. Among these animals were: rabbits, deers, bears etc. They did not only eat these animals but they also used their pelts etc. for trading and clothing. For instance men wore fur breech cloths.

The roles of men and women within the Mohawks was also very clear. The women had took care of the farming, fishing and house work. Men hunted and were the main fighters in war. This did not mean that the women were allowed to contribute less to the political decision making of the tribes. Within the five nation confederacy and the Mohawk tribe there was a equality between men and women.

During times of war the Mohawks had organized groups that were responsible for different areas. Men usually attacked and women stayed close to the long houses and took care of the injured or gathered new weapons. The Mohawks were known for their great organization during war times and for their outstanding battle skills. To look fierce to their enemies the Mohawks painted their faces and cut themselves the Mohawk hairstyle (after which the tribe was named).

Depending on the event the Mohawks had many different ceremonies. One of the major ceremonies was the cry ceremony. When someone died the Mohawks chief danced around the fire for five days and sang songs in memory of the dead tribe member.

They were located along the Lake Ontario and  near the St. Lawrence river. This meant that the Mohawks could plant seeds and grow crops (e.g. vegetables, corn, beans).Due to these waters there was  not only a fertile vegetation but there were also fish and other animals, which allowed the Mohawks to hunt. After trading weapons with the dutch hunting and fishing became more efficient since the tools the europeans had were more developed. 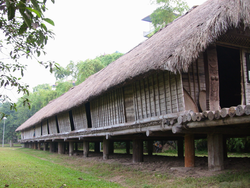 An image of a longhouse
Longhouses

The Mohawks lived in longhouses. These longhouses were approximately 300 feet long and  inhabited many families. One town consisted of about 100 longhouses', this was because within the Mohawk tribe there were about 3000 people.

The location that the Mohawks originally lived in was upper New York. They lived in the valley of the Mohawks river, which eventually flows into the Hudson River. Today, the Mohawks live in Canada. This change of settlement was due to previous wars.

During the time of the  french indian war and american independency war there was a lot of trade interaction between the five nation confederacy and the dutch. Since the dutch had more developed tools they traded weapons for crops etc.


Through the arrival of the Europeans traveling became easier for the Mohawks and the others in the five nation confederacy. Before the Europeans reached american the Mohawks walked or traveled across rivers with bark canoes. This meant that they were unable to expand their territories. The Europeans brought horses with them when they settled in America. Soon the Mohawk traded crops etc. to own their own horses. With these they could build up bigger territories and create more effective trading routes.


Another consequence that happened because of the arrival of the Europeans was war. Before the indians were very peaceful with one another and there were only small fights between tribes. This drastically changed when the Europeans arrived since these wanted to build up their own territories. Throughout the years there were many wars between Europeans and the tribes. These fights have caused the Mohawks to loose their territory and therefore they have had to move to Canada.

The Oneidas people are an Iroquois speaking Indian tribe who resided in what is now New York City . This tribe is one of the original five nations of the Iroquois Confederacy who are. Asked on mutual non-aggression, and was divided into three clans meaning that there were three representatives in the tribe.

In the Oneida tribe there was no set hierarchy. Everyone had equal rights and was allowed to contribute to choices and discussions. Even though equality was very important in this tribe, leaders were still elected. 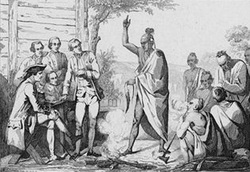 In the Oneida tribe, men were the main hunters of the tribe. They hunted animals such as deers, rabbits and beaver. They also did agricultural activities such as raising crops such as beans, corm, sunflower, squash, and collecting gathering nuts, berries and roots.

The Oneida's hierarchy consisted of a chief who was the leader of the tribal society and made small decisions . After the chief came the women of the tribe who selected a leader/chief that ruled the clan and made major decisions. There were also clan mothers who played quite an important role. Like stated above they were in charge of appointing tribal chiefs, organizing marriages and funerals...etc..

The Oneida clan had a very distinct set of roles between men and women. Each gender had tasks that they had to daily as it was very important for the tribe.

Women had the power of controlling agricultural lands, trading, housekeeping, electing the leaders/chiefs of the tribe and to some extent they also organized warfare and influenced decision making (especially the clan mothers).

The men's role was to hunt, fish and raid through neighboring tribes. Just like the women, they also decided on warfare and traded.

In 1755 the French and English both wanted to invade North America. They both wanted to win the Indians as allies. To stop the war in 1768 there was a boundary line treaty between England and the five nations of the Indian confederacy. The peace however did not last and the treaty was not able to stop the flood of settlements into Indian lands by Europeans.

This created war between England and the colonies. At this point the Oneidas had sent a message to the New York governor saying that they did not want to take sides, but this decision wasn't able to last very long. After years

The men and women in the India tribe had different clothes that varied depending on the gender. Clothes were made out of leather, animal skin that they hunted or fur.

Women wore a long wrap around skirt with deer skin ponchos, a deer skin robe and moccasins as shoes.

The Oneida tribe were settled in villages of clan houses. The size of the longhouse and villages varied. Each village had 60 to 100 longhouses to accommodate the men, women and children of the clan.

Territory
The Oneidas traditional territory is in upstate New York. The Oneida creek and Oneida lake in north central New York were the common areas where the Oneidas lived.

NA, NA. "Mohawk Indians." Learn More about the and Their Culture. Indians.org. Web. 08 May 2014. <http://www.indians.org/articles/mohawk-indians.html>.