Who Were The Iroquois? 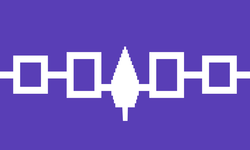 The Iroquois is a confederation or league of tribes in the Northeastern woodlands. The first five tribes were the: the Cayuga, Onondaga, Mohawk, Seneca, and Oneida. Later in the 1700s, the Tuscarora tribe joined. All these tribes were linguistically related. The French gave the Iroquois their name they originally called themselves Haudenosaunee which means People of the Longhouse.

What is the Iroquois Confederacy? 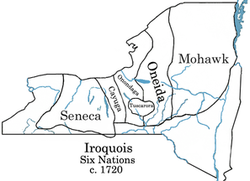 How does it work?

The Iroquois Confederacy was controlled by the Great Council. The Iroquois Nations sat between eight and fourteen Leaders of the Iroquois Nations where they made decisions through discussion and voting. It was truly one of the earliest forms of an actual democracy. Even though the leaders were called "Chiefs" they were actually elected officials, by Clan Mothers from each tribe. Clan Mothers were women who had almost control over everything they could elect the chief and also take away the title a chief from them. Women had a lot of power back then. The reason they are    can house different family's in one house.

How Were They Formed 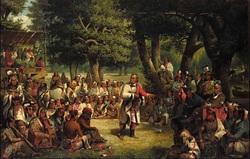 How were they formed?: the legend of the League of Five Nations is that an evil Onondaga shaman named Hiawatha said to have ruled the nations. He practiced black magic and ate human flesh. He loved the war between the nations. One day a warrior from the Mohawks decided to kill the shaman and take back the land, but failed. Then a Hourn (Another Indian Tribe) named Dekanawidah (peace maker) persuaded Hiawatha to abandon his cannibalism and his rule, and made him leader of the tribes which lead to the formation of the League of Five Nations.

How Did The League End 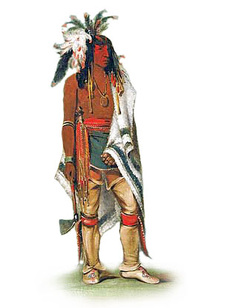 During the War of the French and British The Iroquois Confederacy fought with the British against the French and won. During the War between America and British things got complicated. Many of the Confederacy was siding with the British to stay loyal, because of the British letting them keep their land. The problem was that the Tuscarora and the Oneida sided with the Americans, while the rest of the nation sided with Britain. This advantage was what lead the Americans to win the war, but it also devastated the league of Five/Six Nations. Today the league still exists, recalls the past, but still makes peace with each other.

By: Tony Veikalas and Simon Sieber