Peace:
One of the peacemakers while he was traveling met the Chief from the Onondaga tribe. The chief from Onondaga his wife and daughters had all died. They met in the woods and the peacemaker gave him some shell beads, then told him to follow. The Tribe chief (Hiawatha) took the beads and followed him because he had nothing left in the tribe anymore. They travelled to the Six Iroquois nations to tell them about the peacemaker vision and how we should not have to lose anymore loved ones. They all agreed to there plan called the “Great law of Peace”, apart from one chief from there Onondaga nation, because he was a mean men and believe more in death then peace. This plan positively and negatively changed the past and present for the tribes, because that brought everyone together and began trade. 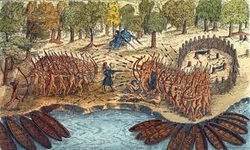 Confederacy:
The confederacy was when all six Iroquois nations can together to play in the strategic struggle between the french and British, who wanted to win North America. It formed in 1570 and 1600, and it was formed to stop cannibalism and advanced peace, civil authority between all the tribes so they could have each other if the English and the French attacked them. the leaders of the confederacy were the chiefs and the village clan leaders, whenever they would need to decide something each tribe would have a vote for each decision. One of the best things about them coming together was that they had very good security and they had lots of rituals that brought them together even more which then meant they had a very good connection when it came to them fighting. The confederacy was one of the Oldest Living Democracies on Earth.  Today, we have made new governments based on this model that are truly dedicated to liberty and happiness, just like it has been practiced by the Six Nations for over 800 hundred years. 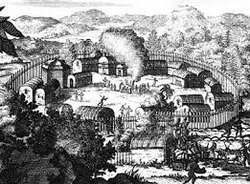 Living Environments:
The Iroquois tribe were “farmers,” they lived off the land. Growing three main foods, corn, beans and squash, or called “the three sisters” to the Iroquois people. They made their villages in the forest nears streams and lakes, so they could set up their villages near their crops. When they made their villages they would make house’s called a “long house” which was as you can tell from the name a long house, they made these because it would fit up to twenty families. Inside the house would have to sides with wooden platforms for them to sleep on and each family would have a space on each side. Living near streams were great for transport because they could go up and down the lake/ stream in there canoes (main mode of transport) to go trade there crops. 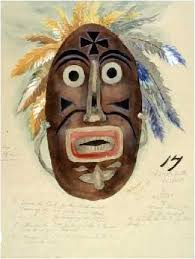 Celebrations:
The Iroquois had 13 moons, they celebrated each moons with a different ceremony for each one. When they started a ceremony started with the men wearing masks would run up and down in the longhouse. They would stir ashes in fire and invited lots of people to come and join in with the festivities. In the Midwinter ceremony they had dancing and games. this also included dream guessing which they believed dreams held a important messages from the dead. during these celebration in the summer and winter the clan mother would give all the newborn babies their names and bring them into the clan, and when anyone died the name would go the the clan mother and she would choose when the baby would get that name and this meant no two people in the clan would ever have the same name.

By Ian and Olivia