Onondaga means people of the hills as their original geographical area is a hilly landscape in central New York State. The Onondaga were one of the five original tribes of the Iroquois Confederacy. They were the tribe responsible for organizing meetings and keeping the records of agreements in form of wampums (belts made of shell beads).

The Onondaga lived in villages made up of long houses (buildings made of tree bark). The Onondaga nation consisted of one large village "Onondaga" and a much smaller village. These villages moved position every 10-20 years for natural resources as they were hunter gatherers, they lived off corn, beans and squash and hunted game and fished. In the Onondaga society women were very important as the head women (the clan mother) elected the clan chiefs and governed the clan along side them. 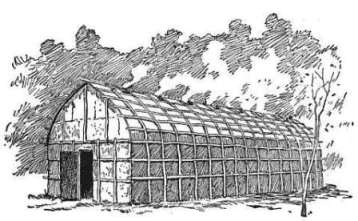 The Onondaga are represented by 14 chiefs in the Iroquois Confederacy or as they call them selves the "Haudenosaunee". These chiefs are selected by the clan mother, she chose them by watching the boys grow into men and when a chief dies he is replaced by a man that the clan mother has found worthy. In the Haudenosaunee each chiefs voice is equal and they vote democratically on their matters. Scholars have placed the beginning of the Haudenosaunee as early as the 12th century but they themselves place it much earlier. Since then the tribes have governed themselves in the same way.

Important People of the Onondaga

The most important historical figure of the Onondaga was Tadodaho. He was a chief powerful in witchcraft and he had the Onondaga under his rule until the peace maker united all the tribes and helped Tadodaho to become a fair and good chief for his people. Tadodaho is still an honorary title given to one of the chiefs in the Haidenosaunee today.

Throughout their history the Onondaga have interacted with the other tribes of the Haidenosaunee (Iroquois Confederacy) and took part in their decisions and went to war with other tribes, through this the Onandaga were a very powerful tribe. Later the Onandaga interacted with the settlers as well. The Onondaga later came to an agreement with George Washington recognizing them as a sovereign state and that they have claims to their lands. This was the treaty of of Canandaigua in 1794. The problem with this agreement was that throughout the later history the settlers made contracts with single onandaga's trading them the whole of the Onandaga land.

Before the settlers the Onandaga were part of the Iroquois Confederacy and as that were very powerful throughout their history. They were the record keepers of the Confederacy and also the tribe that settled disputes and offered solutions furthermore they settled agreements when the other tribes were split evenly on both sides. When the independence war was fought in North America the Onandoga fought on the side of the settlers against the British and so later George Washington recognized them as a sovereign state instead of banishing them from their homeland as was done with many of their brother tribes. 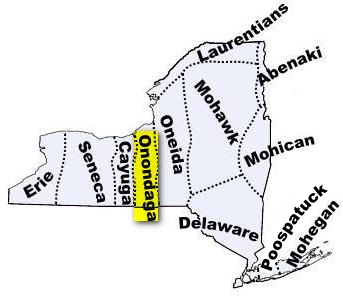 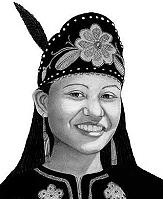 The Cayuga Nation has been living in the surroundings of the Cayuga Lake, their homeland since the 16 hundreds.  The Cayuga land lays between the Seneca Nation to the west and the Onondaga Nation to the east. evidence of Cayuga settlements in many areas surrounding the Cayuga lake including the present day villages of Union Springs, Aurora, Cayuga, Seneca Falls, Ithaca and Canoga has been found. 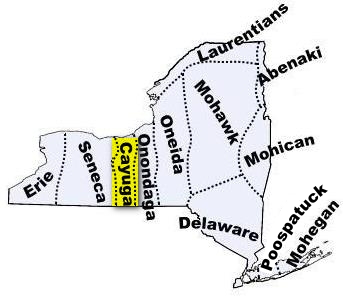 During the 17th century the Cayuga people lived in small villages with about 50 inhabitants each. These villages consisted of long houses The  Cayuga lived in their villages for about 15 years until they moved on to a different area to not leach away all the natural resources e.g. wild animals and wood furthermore they moved to lands where the natural resources were un-depleted. They had an Important women called the clan mother, she was the one who decided about the families and all the important decisions. 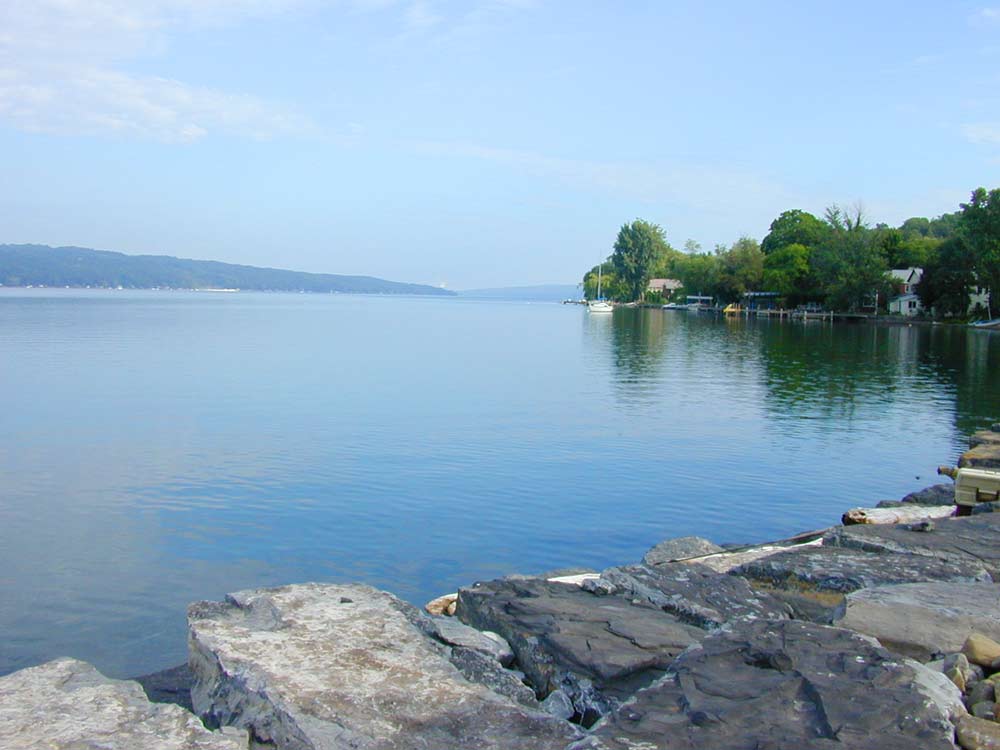 The Cayuga Nation, like all other Haudenosaunee Nations (People of the Longhouse) are governed by the Great Law of Peace.  The Great Law of Peace was made to provide peace and emphasizes the principle of "consensus" instead of "majority rule".  This principle requires a lot of  cooperation and negotiation. The Cayuga nation had and still have three chiefs that are very important and lead the clan with the clan mother.

There were no important figures the only important people were the clan mother and the three chiefs. Clint Halftown, Tim Twoguns, Gary Wheeler those are the current chiefs for the Cayuga nation.

The Cayuga interacted with the settlers from the time that they first arrived e.g. In 1613 The Dutch and the Haudenosauness made a treaty to establish the relation between them. The Cayuga also came to an agreement with George Washington that recognised the Cayuga Nation as sovereign and so have rights to their lands. Throughout the later history settlers made contracts with single Cayuga's buying large swaths of land that did not belong to the individual, through this the Cayuga lost a lot of their traditional territory.