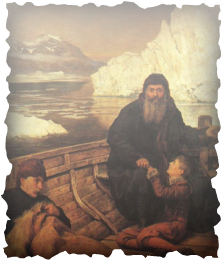 Hudson during the time of the mutiny
Henry Hudson, conceived 1565, England and died after June 22, 1611 close to Hudson Bay, was an english guide and adventurer who, cruising three times for the English (1607, 1608, 1610–11) and once for the Dutch (1609). He attempted to find a short course from Europe to Asia through the Arctic Ocean.

Little is known of Hudson's initial life. A few Hudsons were connected with his supporters, the Muscovy Company of London, an era before his own particular time.  Henry Hudson may have been available on a variety of, for him, life impacting events such as planned voyages to the Arctic arranged by family of his, and other people he was in contact with in his childhood such as the famous captain John Davis. This created a long lasting enthusiastic impression toward Arctic investigation. It is sure that he was overall educated about Arctic topography and that his skill as a pilot was such that two well off organizations picked him to direct perilous investigations.


Henry Hudson made his first voyage west from England in 1607, when he was employed to discover a shorter course to Asia from Europe through the Arctic Ocean. After twice being turned again by ice, Hudson set out on a third voyage–this time for the Dutch East India Company–in 1609. This time, he decided to proceed with east by a more southern course, drawn by reports of a conceivable channel over the North American landmass to the Pacific. In the wake of exploring the Atlantic coast, Hudson's boats cruised up an incredible waterway (which might later bear his name) however they turned back when they decided it was not the channel they looked for. On a fourth and last voyage, attempted for England in 1610-11, Hudson used months floating through the immense Hudson Bay and in the end succumbed to a rebellion by his team. Hudson's findings laid the preparation for Dutch colonization of the Hudson River district, and also English area guarantees in Canada.

In the early spring of 1611, Hudson planned to further explore the Hudson bay to finally discover the passage. At that time many crew members grew homesick and wanted to return home. Then in June, members of the crew mutinied. The mutiny leaders, Henry Greene and Robert Juet decided to set Hudson, his son and seven crewmen adrift from the "Discovery".  Little is known about the fate of Henry Hudson but he is remembered in so far as a river, a strait and a bay in North America are named after him. 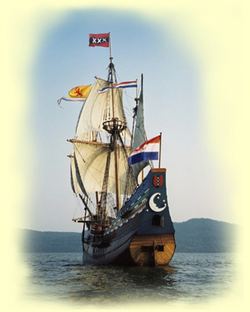 Henry Hudson's ship: "Half Moon"
When Henry Hudson arrived near the shore of what is today known as Staten Island, the Native-Americans were fascinated by Hudson’s ship, or as the Indians had described it in past times, “a large house of various colours.” Dealing with the Native Americans, during Hudson‘s voyage up the Hudson, involved a mixture of commerce, curiosity, and violence. Hudson met with the local inhabitants on the coast and traded European steel knives, tomahawks, and beads for american corn, bread, and oysters. Here, near today‘s New York City, the relationship between future European colonists and the inhabiting society was established by Hudson and his companions.

Important diary entries, as for example one from the 4th of September 1609: “Today the people of the country came around, seeming glad we had come.“, show that initial meetings with the Native Americans went well. Henry Hudson himself even rowed ashore to create a personal contact with those he traded with. The Indians described Hudson as dressed in a “red coat all glittering with gold lace.“, the exact opposite of what they were used to: wearing only animal skins and furs.

However, Hudson, along with Juet, a friend and companion of his, did not trust the Indians at an high extent. Regarding the Indians, Hudson identified that, “They appear to be friendly people, but have a great propensity to steal, and are exceeding adroit in carrying away whatever they take a fancy to.“ It was after this judgement that violent conflicts between the natives and Hudson and his crew started. As Hudson explored the coastlines of New Jersey, Brooklyn, and Staten Island, violence broke out between his men and the Indians. The Europeans stated that it was the Indians who initiated the attack.

As time went by and Hudson explored more of the region, more tumults had caused concern. As soon as several Europeans had been killed, Hudson arranged a meeting with the Indians in order to prevent further deaths. During this historical meeting an Iroquois association leader broke an arrow and threw it into a fire, representing peace between the explorers and the natives. After this event the relationship between both societies had developed positively that trade reoccured soon after. Europeans then traded alcohol in order to obtain precious furs.

Hudson’s developed relation with the Native Americans provided the foundation for European interactions with them.  Alternating between cooperation and violence, the first businesses with the local inhabitants set an example for the European colonists to follow in the future. Hudson played a vital role in the establishment of fur trade that eventually resulted with the Dutch government being wealthier. After Hudson's impacting actions the British and Dutch colonist eventually  destroyed the Native Americans, Hudson had interacted with on his voyage up the river that know carries his name.

Where is Hudson River?

Written by: Leon and Michael