ANONYMOUS
Throughout the time of colonization, many wars were fought in Asia (especially to gain new territories in India and China), Africa and the Americas. The European monarchies wanted to expand their properties and power by exploring new land and declaring it to be theirs. This inevitably led to conflicts between the countries, even though some monarchies already had to fight their own people in order to prevent uprisings. The political decisions in Europe were linked very closely and had huge effects on the rest of the world.
The explorations were important for the monarchies - especially the British Empire - to regain their wealth and status in international politics. It was also a great opportunity to earn back any debts the monarchies had made.

Most of the wars during the time of colonization were fought between different colonies, Indians and European forces. There was not yet a united American army.

Originally, the British Kingdom and the Dutch Kingdom were rivals in North America. A good example for this is New Amsterdam - later New York. After the Dutch had mostly left, the british and french were rivals. This rivalry was often displayed; the ones who suffered the most were the American Indians. Some American Indians formed alliances with the French or the British. The British monarch was King George II; the French monarch was Louis XVIII.
Map of the region where the war took place 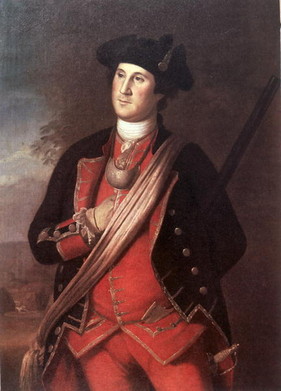 George Washington in the uniform of a colonel
The French & Indian war was very bloody and ended with death for thousands of soldiers; it took more lives than the American revolution. It lasted for 9 years from 1754 to 1763. In 1752 the tension between France and England grew because they were competing over land and trading. In 1753 the French captain Legardeur de Saint-Pier reat Riviere aux Boeufs rejected Virginia's ultimatum over French encroachment. In 1754 George Washington attacked the French, the troops retreated to the Great Meadows and built “Fort Necessity”. Two months later the french take over the Fort, and Washington resigns. The british seize Acadia in 1755. Not long after that the British won the battle of lake George.
One year later, May 8-9 1756, Great Britain declares war on France. In August, the French capture “Fort Oswego”. In July 1758 the British seize Louisbourg, opening the route to Canada. The French surrender Fort Frontenac, thereby end the possibility to communicate with their troops in Ohio Valley. The British make peace with Indian tribes. 1759 the British take Fort Niagara from the French. After this victory the Britsh control the whole western frontier. In May 1760 the French siege of Quebec fails, Montreal falls to the British and the letters are signed finishing the surrender of Canada. In September 1760 the British flag was raised and the British make peace with the Cherokee Indians. In 1762, the French attempted to retake Newfoundland, but they failed. In 1763, all the French possessions east of Mississippi are given to the British. Pontiac, the Ottowa Chief, proposes a coalition of Ottowas, Potawatomies and Hurons for the purpose of attacking Detroit. Lastly, the indian power in the Ohio Valley is broken October 1763.
The French and Indian war (1754-1763) was closely linked with the 7-year-war in Europe (1756-1763), which broke out two years after. The British only joined the war to fight the French and gain land in the Americas. This war permanently changed the history of present day Canada and USA, as all of Canada would be french speaking and the USA as they exist today would have never evolved. The end of this war was negotiated along with the end of the 7 year war with the treaty of Paris (1763). In the terms of the treaty, France gave up all of its territory in North America; Britain was now the strongest territorial force in North America. This laid the foundation for the Commonwealth states of the United Kingdom and ultimately lead to the war of independence.

- George Washington In The Uniform Of A Colonel Of The Virginia Militia During The French & Indian War .Fine Art. Encyclopædia Britannica ImageQuest.Web. 27 May 2014.http://quest.eb.com/images/108_265161