Written by Hoabinh and Maria 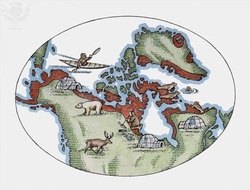 The Inuit people are a nomadic tribe of the Arctic regions of Canada, the United States and Greenland. The Inuit are commonly known as “Eskimos”, although this term is slightly offensive since it translate to “raw meat eaters”. Little is known about this tribe because they had no written language. However, found artifacts date back to 1000 AD. It has also been proved that the Inuit must have come along the Bering Strait from Asia to Alaska around 3000 BC, then 500 years later they stretched out further to Greenland. In 1250 AD, the first Inuit entered Greenland, passing through the Smith Sound area. The way we know this is that many of the new born children have the Mongolian spot which is a accumulation of pigment cells on the lower back. 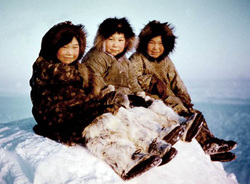 The lifestyle of this nation consists of hunting for their food, since the Inuit always stayed above the tree line; farming was impossible in these extreme conditions. Their diet was based on sea animals such as seals, walruses, whales, caribou, fish and even polar bears. Their clothing was made from animal skin and fur, from the hunted animals. The thick coats that they wore are called parkas; these were essential in the cold temperatures. During the coldest periods they settled in igloos. However, when temperatures rose and the snow melted, their shelter was build from animal skin stretched over a frame.

Another aspect of their lifestyle was that there was no official organization or leaders. Nevertheless, there were more important people who tended to give advice and directions. These people were always men though, in the Inuit tribes, women were treated badly. They were worth as much as a dog or wood. However, the Inuits always cared a lot for their family. Each family had a job. For example there was the hunting family, who worked together to share food. Each family's role was as important as another. Men were doing the technical jobs, and women did the cooking and made clothes. The children were always expected to help. The boys worked at home until they were old enough to hunt, and girls stayed at home all their life. 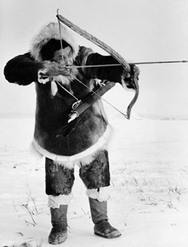 They hunted seals, walrus, whales, and caribou. Inuits were the first to become expert at hunting large animals, such as whales, in the Arctic regions. They live in such cold temperatures they can store meat for a very long time because it doesn’t go rotten.

Stories were very important in the Inuit culture. During the cold seasons, they mostly stayed inside. So they spent their time telling stories. They mostly told them by singing. They also sometimes danced to tell the stories. The girls were given knives to draw the images of the stories on the ground. Inuits used legends to tell the creation of the world.

Over the last 150 years, Christians have gone to the Arctic to get the Inuit to abandon their old beliefs and become Christian. Many Inuit were persuaded, so that there are Christian churches all through the Arctic. However, this split the community into two sections, and these divisions were bitter.

Today the Arctic region has about four million inhabitants. The Inuits speak Inuktitut. What they did was mix Mongolian, and change certain sounds and words.

The first discovery from Greenland (by an European), was made by Martin Frobisher an English man, in 1570s. Martin Frobisher offered the Inuits iron, so that they would be able to make tools. In 1818s, British explorer John Ross arrived and explored the Arctic. Many explorers got help from the Inuit during their explorations. However, quite a few also died because they refused the Inuits help. In 1850s, the Franklin expedition (England) explored the Inuit's land. In 1905, there was the Hudson expedition. Hudson was very interested in the inuit's fur. Before the First World War, he exchanged useful tools for fur. Some of the most common tools the Inuits used were the stone knife, the unaq and the kavaik, the bis and arrow, the harpoon, and the ulu.

Artistic explorer Roald Amundsen used and learned the Inuits techniques to reach the South Pole and travel across the Ice sea. Robert Peary an American explorer was the first person to reach the North Pole. The Inuit helped him by letting them use their sleds and dogs. 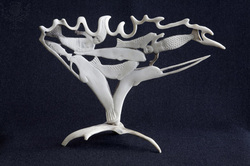 Important figures of the Inuit

Mable Nigayath is one of the few Inuit people who are famous artists. Inuit art is best known for carvings but also paintings.

Fur traders started to come to the Inuit because they had so much fur. This fur trade completely changed their life because now they could hunt and trade the fur for tea, coffee and tobacco. The Inuit started hunting more than just for food; this was also possible because of the guns that they got from the fur trade. 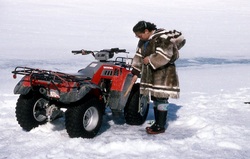 Today, the Inuits ar﻿e settled down in proper houses and have modern goods in shops. In contrast to the past where the Inuit had to burn whale fat to get some heat and light, they now have electricity. Inuits still preserved their ancestors culture.
﻿
Fun facts

-In certain parts of the Arctic regions the sun sets in the middle of October, and does not rise again until mid February.
-A big whale could feed about fifteen families for one year. When it's cold its important to eat a lot, but the Inuits adapted to the cold climate and were able to not over feed themselves.

Library. The Spririt of All Things. Digital image. Athropolis. Web. 21 May 2014. <http://www.athropolis.com/arctic-facts/inuit/shaman-mask.jpg>.