The Native American tribes were very resourceful with the materials the land provided. The tribes used various materials to create innovative inventions. These inventions were needed to survive the conditions or were of cultural relevance, such as the totem pole and the parka.

The Inuit lived in the harsh conditions of northern Canada and Greenland. These regions are a part of the tundra. The tundra is a very cold region with a large amount of snow and ice. These temperatures cause very little vegetation which limits resources. The Inuit however were very creative and created many important inventions that were needed to deal with the conditions. 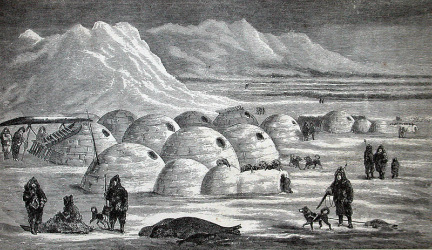 Inuit Village- http://en.wikipedia.org/wiki/File:Igloos.jpg
Igloo- An igloo is a home made of ice and snow. The snow insulates the igloo trapping the heat inside. Igloos were made because the Inuit needed a home that kept them warm. Also the resources needed were easy to come by.


Kayak- A kayak is a one man paddle boat. Th kayak is used for crossing water and for hunting sea animals. The kayak was an important invention because sea food was a main income needed to live. The kayak was made from seal skin and was completely covered except for one hole on the top for the person to sit in. 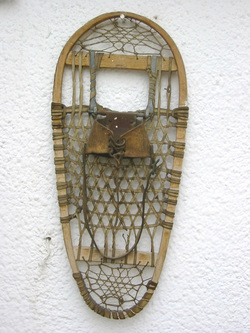 Traditional Inuit Snowshoe- http://upload.wikimedia.org/wikipedia/commons/2/20/Snowshoe2.jpg
Dog sled- A dog sled is a sled which is pulled by a group of dogs. This was an important invention because it was a lot faster than walking which means more could be accomplished in a shorter amount of time. The dog sleds could also transport goods such as heavy hunted animals, for example seals and whales.


Parka- The Parka is a traditional Inuit coat. The parka is used to keep the Inuit's body temperatures from plummeting due to the cold environments. It is lined with fur and has a hood. It is very bulky so that they have room to move around easily.

The Plain Indians lived in central United States and southern Canada. In this region it very flat hence the name Plain Indians. The Plain Indians used to live on the east coast but were driven out by European settlers. They were nomads, which was a key reason for some of their inventions. 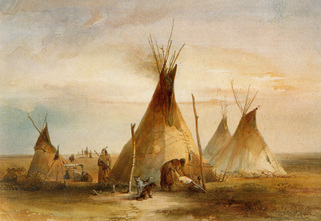 Native American Tipi
Tipi- As we stated earlier they were nomads which meant they were always on the move. This lead to the inventions of tipis. A tipi is a portable house which is easy to set up and take down. They are made from animal skins and have a hole on top to let out smoke from the fire.

The Woodland Indians lived in the north-east United States. This area is mostly forest and is located very close to a harbor which is good for transport and resources. The trees wood was a resource that was used multiple times in their inventions. The European settlers arrived and bought the land off them. They did not think that it was permanent because they did not understand the meaning of possessions.

Longhouse
Totem Poles- Are a work of art. They are a long wooden pole with carvings in it. They are carved out of tree trunks. They were sculptures that would slowly decay in the forest. They were made for the enjoyment of the people.


Longhouse- A longhouse is exactly that. It is a long, slim house with one room. They were built to house many families in one narrow room. The beds and other things were positioned on the sides of the wall.

The Native American people were very innovative and invented many items that were necessary to survive in the tough conditions or were of importance to them. These inventions such as the snowshoes, kayak, parka, tipi and others have influenced many inventions that we have today. Some of their inventions have been developed and are still in use today.