Woodland Indian tribes extended  from New England and Maryland to the Great Lakes Area. Woodland Indian consisted of two main tribes, Iroquois and Algonquin. They lived in forests near lakes or streams, this is why they were called Eastern Woodland Indians. The region covered the East Coast what is today the United States.

Most historians believed that the Iroquois was formed at around the time of 1142 (http://www.ratical.org/many_worlds/6Nations/DatingIC.html). They lived in the area that is now known as the East Coast of the USA, from the Atlantic Ocean to the Mississippi River and also including parts of Southern Canada.

In the Iroquois culture nobody had a higher status than another person. The leaders were respected, though they were thought of as equal as a lower man. Men and women were equal as well, though they had different occupations. The women were in charge of property and agricultural property like houses. Children and women were also in charge of gathering while men hunted and fished. The Iroquois lived in long houses which housed more than one family. If a married couple wanted a divorce, in the Iroquois culture, the man would be asked to leave the house along with all of his belongings. There were no police in their culture because hardly any of the Iroquois committed any crimes. The only two crimes that a person could commit would be theft and murder, and this was punishable by death. Although, the Iroquois did overlook murder if the person was drunk because they believed that rum held a stronger power than man. The Iroquois did not think of themselves as strong because of the victories that they had but because of their allies.

The Iroquois made their clothing from soft deerskin. Both men and woman wore leggings, shirts, and moccasins. Women wore a skirt or a dress that covered most of their leggings. The women wore their hair long. Warriors wore their hair in a hairstyle called the mohawk. The mohawk is a a wide stripe of hair left down the middle of the head. The men also removed all body hair by scraping it off.
In winter men added a smock that went down to their knees for warmth. Both men and women decorated their bodies with tattoos and they decorated their clothes with dyed porcupine quills.
("Encyclopædia Britannica ImageQuest." Encyclopædia Britannica ImageQuest. Web. 23 May 2014.) "Haudenosaunee (Iroquois) Indian Fact Sheet." Facts for Kids: Haudenosaunee (Iroquois) Indians. Web. 23 May 2014.

The Iroquois religion was centered around the 'Great Spirit' who was believed to be their creator. They believed that they could indirectly communicate to the Great Spirit by burning tobacco which could carry prayers to the lesser spirits of good. Dreams were also considered important. The Iroquois believed that when they died they would go to the afterlife and join the Great Spirit. Though now, many of Iroquois people have converted to Christianity. 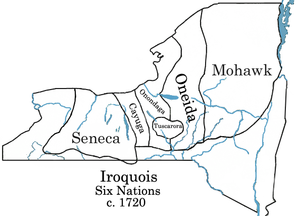 ("IROQUOIS CONFEDERACY." IROQUOIS CONFEDERACY. Web. 23 May 2014.)
First there was the five nations which consisted of five tribes who all lived near each other. These five tribes were called the Mohawks, Oneidas, Onondages, Cayuges and the Senecas. The Tuscora tribe then joined the five nations later, at around 1720, making it the six nations. They were also known as the Haudenosaunee, 'the six separate Indian nations' (although in the treaties they were called the six nations). They formed this nation to create security against other tribes. Onondaga was the council overall for the six nations. They all spoke the same language though each tribe had a different dialect.

Interaction With Other Cultures

The Iroquois were a very closed tribe. They mostly fought with the other eastern tribes, especially there neighbors the Algonquins. Although, they were also engaged in trade with their neighbors. Iroquois then established alliances with the Europeans when they discovered America. They sided with the Dutch, and later the English, to gain firearms to fight against other tribes. In 1640 the Five Nations started conquering neighboring tribes. 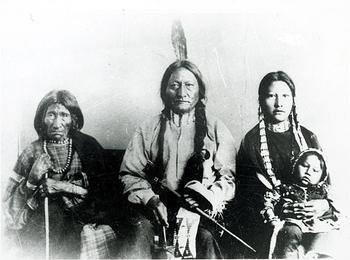 "Algonquin and Other Indigenous People Take Stand against Obama."SodaHead. Web. 23 May 2014.

The Omàmiwinini, or more commonly known as the Algonquins, are a tribe who migrated from the Atlantic coast. They are the original natives of the southern Quebec and Eastern Ontario region. They are native North Americans and native Canadians. Today they live in nine communities in Quebec and one community in Ontario. 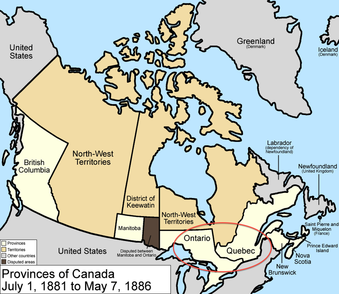 The Algonquins call themselves the Omàmiwinini though they are now more commonly known as the Algonquins. Algonquin means 'they are our relatives/allies'. The Algonquins lived in cone-shaped houses in the area of Southern Quebec and Eastern Ontario. Though, they also lived in small round building called Wigwams and some of them lived in Longhouses like the Iroquois. It depended on where the Algonquins lived. Their language was called Anicināpemowin or Omàmiwininimowin. In the past, the council members chose the tribe's next chief,  which was often the last chief's son, nephew or son-in-law. Although, now a woman can be the chief too.
The Algonquin women gathered plants to eat and did most of the child care and cooking. Men were hunters and sometimes went to war to protect their families. Both genders took part in storytelling, artwork and music and traditional medicine. 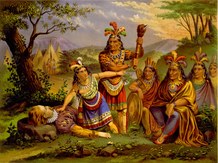 (Pocahontas saving John Smith from execution by her father) 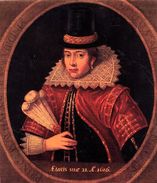 Pocahontas was a famous Algonquin Indian. Born in 1915, she was the daughter of the chief Powhatan. She was thought to be friends with an Englishman called John Smith and when he was captured by an Indian raid, she saved him from execution by putting her head on his. Later in her life she was captured during Anglo- Indian hostilities in 1613 and they held her for ransom. Though, she turned Christian and changed her name to Rebecca and when she had the chance to go back to her people, she stayed in England. Pocahontas (Rebecca) then married a tobacco planter called John Rolfe. She became famous in England for becoming the first civilized savage. She died on 1617 at the age of 21 or 22 by an unknown cause. She was buried at St George Church.

Interaction With Other Cultures

Algonquin were the first meet the Europeans when Samuel de Champlain saw a tribe led by Kiticisipirini, who was the chief in Eastern Quebec. In the summer of 1603 the Algonquins allied with the French, because of Champlain, so that they could acquire firearms. The Algonquins also became trading partners with the French. Though, the alliance led to conflict against the French.

The trading route and the Algonquin's language spreading was a large influence on America. In addition, some medical products were influenced on America, like many plants that are used now days, to treat people. A lot of symbols that the Algonquins had can be seen today on flags or sport team logos as well. 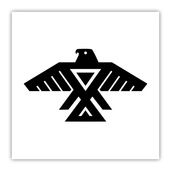