The Woodlands were one of the first native tribes. Their area extended from parts of Canada to a lot of the U.S. The Woodlands lived during 1000BCE until 100CE and even today some Woodland tribes still exist even though they live under more developed circumstances. They lived in long houses which were built near forests and lakes. The Woodlands were considered a very big tribe which was made up of smaller clans such as the Iroquois, Mond builders, Eastern Woodlands etc. The Woodland peoples were known as hunters and gatherers which lived in a mostly civilized way and developed their own culture and life style to survive under the circumstances they lived in. ﻿ 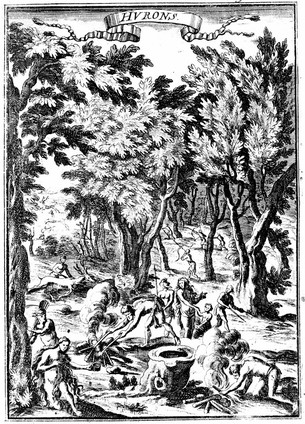 To the Woodlands, family life was very important. They valued each other and lived together in quarters. In families the elders were the most respected ones as they were the ones who had most experience in life and knew what life was about. Therefore, grandfathers were the story tellers of the family. The eldest females were in charge of the longhouse and considered as symbols of fertility. Females also had the responsibility in raising the children. Children mostly helped in fields or had other duties which would support the family. Overall all Woodland families valued one another and could be dependent on each other, as the family was one of the most important things they had.

Roles of men and women:

Even though every person was valued there was a clear difference between men's and women's duties. Men were responsible of hunting and supplying the family with food etc. Women were in charge of things which were not as dangerous, such as collecting berries etc. Everyone worked together as a family and every person had clear duties to follow.

It was taken for granted that everyone followed how the hierarchy was built up and fulfilled the family requirements and additional duties. The Woodland children grew up like this and therefore for them it was taken as a matter of course to do what they were told. Some things which belonged to their culture and were taken quite seriously were cultural rules such as face paint. The colors used would express one's feeling and during that time each color represented something and therefore they used face paint as a kind of way of communication. When someone was sick, it was a traditional rule to wear a mask and through this scare away the evil spirit out of the sick person. To keep clear differences between genders there were clothing rules. Men wore a loin cloth and women had to wear dresses made from grass. Children just ran around wearing nothing. Another cultural rule was that a ceremony had to take place. When someone died, the chief organized a cry ceremony where the chief himself danced around fire. This lasted for five days. Family members tied five knots into milkweed and every day one knot was untied until the ceremony was over. For the woodlands this transitional rule was a sign of further life and being free from anything bad you have done during life.
Clan mothers elected the chiefs for the Iroquois confederacy and as such the women had a big role in governing of the tribe. Furthermore the 50 chiefs of the Iroquois confederacy had an equal say in the tribe.

It should have become clear that not all of Americas native tribes were the same. The Woodlands can be counted as a special tribe as they lived in accordance with rules and regulations in a typical way of civilized nations. In the past most people considered early americans to be the wild ones which all lived under the power of one great chief. On the other hand the Woodlands were different. They may have had a chief, but as this ruler misbehaved, it was up to the women to make him resign and elect another one. The Woodlands were significant as woman had a fair amount of rights unlike in other societies. All in all the Woodlands can be taken as a fairly civilized tribe. 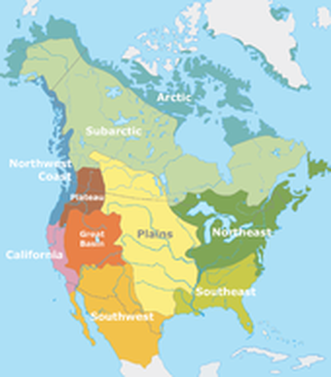 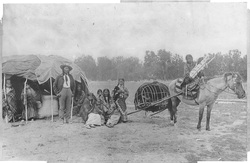 The Plains Indians originally came from the Rocky Mountains and the woodlands of southeastern Manitoba. Their population reached to about 33,000 peoples in the 1700's. Their settlements were divided into bands consisting of 50-100 members. These peoples communicated using the languages Algoniquian, Athapaskan and Siouan. Large herds of buffalo supplied these with meat. The Plains Indians were considered hunters and gatherers which discovered their own culture and lifestyle to survive under the circumstances they lived.

Ceremonies you had to attend

The ceremonies that everyone had to participate in were often cruel and violent. A example of this would be "the piercing day". On this day a few people from the tribe would sacrifice themselves. The medicine men would then cut into each of their chests to put a peg, they would then attach a rope to the peg and then tie it around the "sacred tree." They would then have to yank the peg out. Another sacrifice was to hang yourself by the nipples.

In conclusion the Plain Indians were one of the first native tribes of America. They had cruel punishments, rules and ceremonies. Women were not respected and had to take care of house holds and supply the family with water and wood. On the other hand the men were hunters and gatherers. The police and the elders were the most respected and often the most wise. All in all the Plain Indians were not organized due to the fact that they did not have written language, nor any drawings that could have given more information about their culture and history.

MacLeod, William Christie. "Police and Punishment among Both American Indians of the Plains." Web. <http://scholarlycommons.law.northwestern.edu/cgi/viewcontent.cgi? article=2713&context=jclc>.