Francisco Vasquez de Coronado was a Spanish Conquistador and Explorer. He was born in Salamanca, Spain in the year 1510, and lived in the Elizabeth Era. He is famous as the first European to explore the southwest of north America, which includes Arizona and New Mexico.  Francisco's family was very noble, thus his education was very good, which is why he was chosen to go to New Spain (Mexico) with the Spanish Viceroy, Antonio de Mendoza. He sired 8 children, although whether his descendants are still alive is unknown. He was an explorer, and loved going out in the open waters, but that kind of unbridled joy comes with a price. When he was no longer able to sail and explore he turned to his banks for the money he needed to live comfortably, but he found nothing but dust. He had bankrupted himself, never giving a thought as to what he would do in later life. His life is not documented after he explored, simply because it was not worth documenting. Francisco was a very proud explorer, and he loved what he did. The things that happened during his expedition were both disappointing and difficult, but Francisco loved exploring, and for him that was all that mattered. 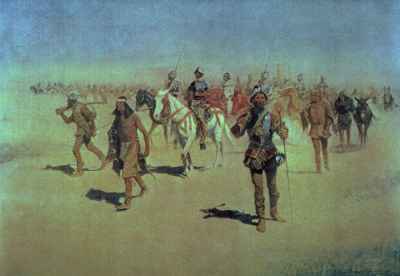 The Spanish viceroy had heard a tale of golden cities, and because they were credited by a French nobleman he also believed them. The Spanish Viceroy then tasked Francisco Vasquez de Coronado with finding the gold from the city, and bringing some back to verify the story of the nobleman. Francisco was very enthusiastic about the search and set out to find the golden cities, accompanied by 340 Spaniards, 300 Indians, 1000 horses, 1000 slaves and six swivel guns to find them. He devoted his life to the search of the seven golden cities, but although he did not know it, here was a bitter surprise awaiting him. The first of the seven rumored golden city was not golden at all, but a poor village. Francisco was told by an Indian in the village that there was a truly golden city. And so he departed for the other city, eager to believe that he had not traveled in vain. Hoping for better results, Francisco left. But again he set out to find another poor village. The Indian who came with them as a guide later confessed, under torture, that the whole 'golden city' was a ruse. The misleading guide was executed. He returned to New Spain, with his expedition a branded failure.

1510:
Francisco was born in Salamanca, Spain (No information on when he was born)

1537:
Francisco married the daughter of a wealthy colonial treasure, and he had eight children by her.

1539:
The viceroy, Antonio de Mendoza, was told of the seven cities of gold by a fransiscan friar named Marcos de Niza. He told of a shimmering city named Cibola that the local Indians described as only the smallest of the seven, and that it held more gold than all of the Incas.

1539:
The Viceroy gave Coronado the job of searching the South West for the Golden city, and all the others as well.

1540 Feb 23:
Francisco began his quest for the Golden cities, and the expedition left from Compostela, aka Senora, accompanied by Fray Marco as a guide.
Francisco leads the expedition consisting of 340 Spanish, 300 Indians, 1000 horses, 1000 slaves and six swivel guns. The guns were there to rip down any possible walls and to colonize parts of America.

1540:
On July the 7th a battle against the Pueblo Indians at Zuni takes place - Coronado is wounded but he manages to establishes a base

1540:
Francisco Vazquez de Coronado reaches Cibola but it was not El Dorado the gleaming city of wealth described by Fray Marcos. Fray Marcos de Niza was dismissed as guide and sent back in disgrace

1540:
An Indian guide, nicknamed the Turk, tells of another rich kingdom called Quivira.

1541: Spanish explorer Francisco Vasquez de Coronado arrives in Kansas in search of gold & silver and reach Quivira. Huge disappointment again when Quivira is found to be no more than a poor indigenous village of the Wichita he tortured Turk the guide, who then confessed that the seven city's of gold are a myth. The false guide was executed.

1542 April: Francisco Vazquez de Coronado finally decides to go home. He failed to accomplish the task he had been trusted with. For he had failed to find the seven Cities of gold though he made a tremendous voyage of discovery across America discovering, for example, the Grand Canyon.

1542: The viceroy of New Spain officially says that the expedition of Coronado was a failure, but he does not change Francisco's position.

1544: Coronado was on trial and found guilty of abuse towards Indians. He was fired. 1544: Francisco is sent to work in a small job in Mexico City
1554: Francisco Vasquez de Coronado died September 22, 1554