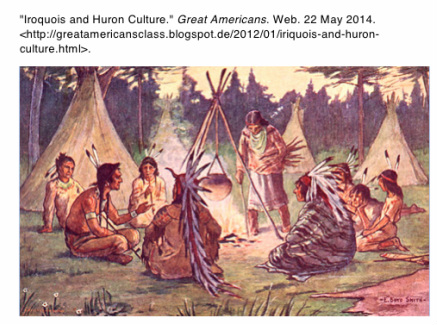 ﻿What is the Iroquois Confederacy?﻿

According to legends, this is how the Iroquois confederacy was formed. Between 1359 and 1600, there was a cannibal Onondaga chief called Todadaho. (1) His hair had snakes tangled in it and he ate out of bowls made of the skulls of his victims. He saw and knew everything, and he could kill with his looks. During these dark times, there were two heroes, Deganawidah and Hiawatha. Deganawidah was from Huron, but he travelled among the Iroquois. When he arrived at the violent Onondaga villages, he watched the people cook their victims from a hole in the roof. When one of the barbarians saw the stranger's face reflecting in the cooking pot, he thought it was his own face. He immediately left the practice, thinking that the beauty of his face was incompatible to the horrendous practice of cannibalism. When he left, he met Deganawidah, who shared his words of peace and righteousness. Deganawidah named the man Hiawatha, and he helped Deganawidah spread the message of peace to Todadaho and the rest of the Iroquois chiefs. When Hiawatha had convinced everyone, Deganawidah established the Iroquois confederacy on the banks of Onondaga Lake. Deganawidah is now known as the peacemaker. (3) 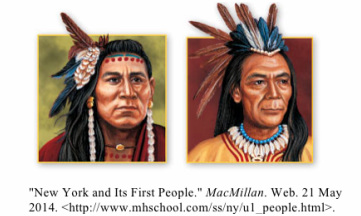 The European culture threatened the traditional Iroquois culture, at first the Six Nations resented most European ideas and techniques. But, in 1798, the Quaker delegation worked among the Seneca and taught them how to read and write, as well as modern farming techniques. However, the Iroquois Confederacy also ended up selling large amounts of their land to Europeans for useful trading goods. (3)

Disease and War
Sadly, the Europeans didn’t just bring a “civilized” lifestyle, they also brought disease. The diseases they brought over after spending weeks on boats killed thousands of indigenous people. However, disease wasn’t the only reason why thousands of indigenous people were killed. War was also a factor, but the Iroquois Confederacy also learned from these wars. Due to the advanced fighting techniques of the Europeans, the Iroquois Confederacy was forced to develop better fighting tactics as well. Evidence that their weapons have developed were also found, first they used stone, bone, shell and wood, and later they used metal axes and knives. They also used to use animal skins which eventually changed to woven cloth due to European influence. Not only did their tactics change, but also the motives for fighting. They used to fight for revenge or to obtain goods, now they were fighting for economic advantage, seeking control over hunting Grunds.  (3)

How did the Iroquois Confederacy Influence America? 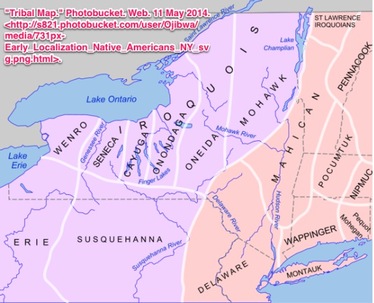 In 1990 there were only around 50,000 Iroquois left alone in the US, 5,000 Iroquois live in Canada. After the American Revolution the Iroquois Confederacy lost all their land because they weren't included in the New Treaty.

Reservations
Luckily, the Americans set aside reserves for the Six Nations to live on freely. The Six Nation reserve is open to all members of the confederacy except for the Oneida, who have a reservation in New York. Overall, the Six Nations have 10 reservations, although they mostly live in urban areas, and only about 11,800 people live in the reservations. Seven reserves are in New York State, one in Wisconsin and two in Canada. The Onondaga reservation serves as the capital of the Iroquois Confederacy.

Current Lifestyle
Many Mohawks and Oneida work as structural steel workers, and in 1993 the Oneida even opened a gambling casino. Even though the members of the six nation still celebrate most of their festivals, the majority are Christian or followers of Handsome Lake, a Seneca profit of the late 18th century. (6)